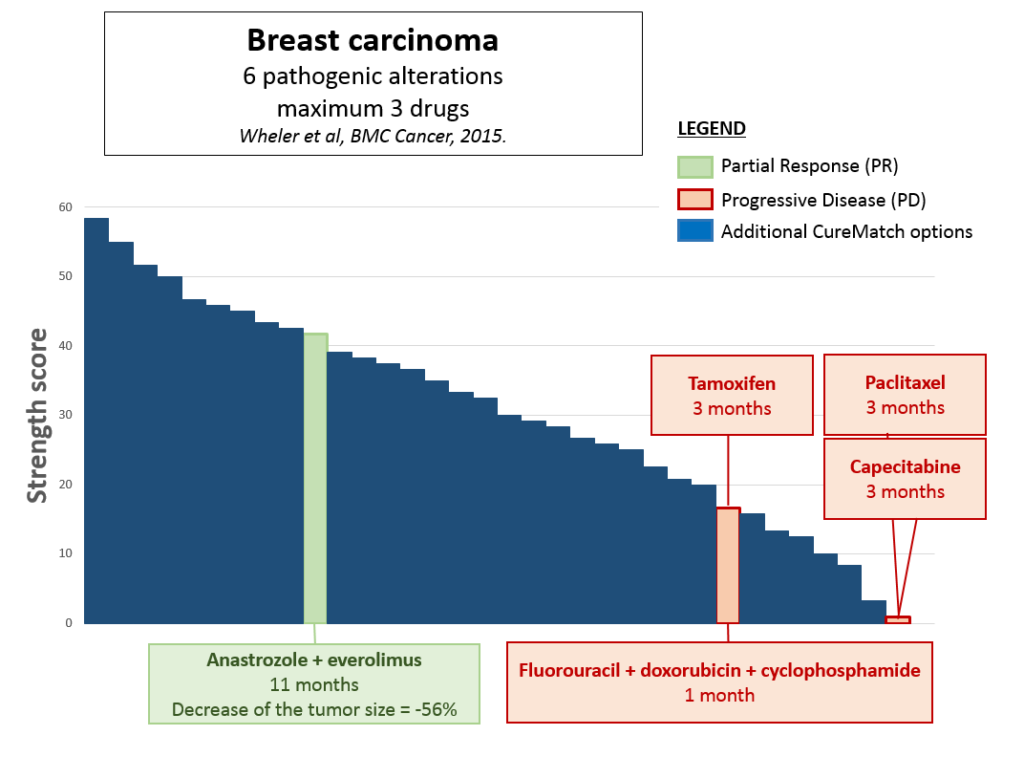 In this case study, a retrospective analysis was performed using data from a metastatic breast cancer patient. The patient was given five lines of treatment; the first four quickly failed and the fifth was highly successful. The analysis shows that CureMatch can correctly rank the efficacy of treatment options, and illustrates multiple benefits of using the CureMatch analysis.

Soon after diagnosis, the patient received her first line of chemotherapy, consisting of paclitaxel. The treatment was stopped after 3 months, due to lack of efficacy. Additional lines of treatment included chemotherapy (fluorouracil/doxorubicin/cyclophosphamide), a single-agent hormone therapy (tamoxifen), and additional chemotherapy (capecitabine). None of these therapies helped to reduce the size of the tumor, and progression of the disease was observed in less than 3 months with each of them.

Rapidly following the combination therapy, the size of the liver metastases decreased by 56%, and the patient was considered to be in partial response, which has continued for at least 11 months after treatment initiation. 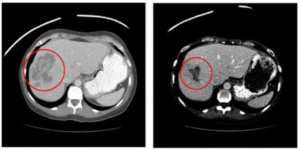 Fig. 1. CT scans of the abdomen before treatment (left) and after 6 months of treatment (right). After 6 months the patient exhibited a partial response (56% decrease in hepatic disease).

Retrospective Analysis
The CureMatch analysis was retrospectively performed to determine whether CureMatch would have been effective in correctly ranking therapy options, using published patient data. A score distribution from the resulting CureMatch report is shown in Fig. 2, which ranks the likely efficacy of various treatment options using combinations of 1, 2, or 3 drugs. The efficacy of the options is ranked by descending Strength Score, which is a proprietary scoring system developed by CureMatch that analyzes the individual patient’s molecular tumor profile and estimates the best therapeutic agents using proprietary algorithms and manually-curated databases. 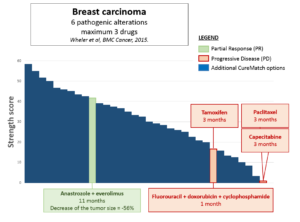 FIg. 2. Score Distribution from CureMatch report. All possible combinations of 1, 2, or 3 drugs are represented and ordered by descending strength score. The successful therapy is shown in green, the unsuccessful lines of treatment in red, and other potential options (that could have also been considered) in blue.

In the CureMatch report, the successful personalized combination therapy option (anastrozole + everolimus) received a Strength Score of 42, whereas all of the unsuccessful chemotherapy and hormone therapy options (shown in red) had scores below 20. Other potential therapy options that were suggested by CureMatch as options, but not considered for the patient during treatment, are also shown in the plot in blue.

The conclusions are two-fold:

This case study further supports the notion that personalized combination therapy should be considered early in the treatment process. CureMatch empowers oncologists with the knowledge and insight to consider these options for their patients.

The original study was published by UCSD oncologist and CureMatch co-founder Dr. Razelle Kurzrock and her colleagues in the journal BMC Cancer. Co-authors on the article were J.J. Wheler, J.T. Atkins, F. Janku, S.L. Moulder, R. Yelensky, P.J. Stephens, and Razelle Kurzrock. The subsequent retrospective analysis was performed by CureMatch.