Two patients with metastatic liver cancers were treated with one or more lines of chemotherapy. Personalized combination therapy options were then suggested using a beta version of the CureMatch platform, leading to stabilization of the condition in both patients.

Case Study #1
A 62-year-old man diagnosed with BCLC (Barcelona Clinic liver cancer) stage B hepatocellular carcinoma (HCC) was initially treated with chemoembolization, but nevertheless developed metastatic disease. Despite subsequent treatment with sorafenib, the disease continued to progress. At this time, a personalized medicine approach was taken.

A liquid biopsy was taken of circulating tumor DNA in the blood, and next generation DNA-sequencing was performed (Guardant360®), revealing the CDKN2A R80* and CTNNB1 G34V genomic alterations.

The patient data was then inputted into the CureMatch platform, and a report was generated that ranked multiple options; the highest ranked option was personalized combination therapy using palbociclib (targeting CDKN2A R80*) and celecoxib (targeting CTNNB1 G34V). The oncologist selected this option, and started the patient on celecoxib. After 4 weeks, the level of des-gamma-carboxy prothrombin (DCP), a non-functional prothrombin which is generally regarded as an HCC biomarker, declined by 31%. Palbociclib was then initiated, and over the next 4 weeks, the level of DCP further declined a total of 84% from the baseline (Fig. 1).

Fig. 1. Des-gamma-carboxy prothrombin (DCP) levels in a patient with stage B HCC before and after treatment with drugs selected by CureMatch decision support. DCP levels were reduced by 84% after 4 weeks of combined therapy of palbociclib and celecoxib.

The patient’s condition stabilized as a result of the personalized treatment approach.

A personalized medicine approach was taken. Both a solid tumor biopsy of explanted liver tissue and a liquid biopsy of circulating tumor DNA in the blood were taken. DNA sequencing of the solid tissue biopsy was performed by Foundation Medicine, and DNA-sequencing of the liquid biopsy was performed by Guardant, with the combined tests revealing the MET Y501C missense mutation, the TP53 R273C missense mutation, and the PTEN L139* nonsense mutation.

The data from both tests were integrated and inputed into the CureMatch platform, and a report was generated that ranked multiple options; the highest ranked option was personalized combination therapy using cabozantinib (targeting MET Y501C directly and TP53 R273C indirectly) and sirolimus (targeting PTEN and also serving as an immunosuppressant due to transplantation). The patient initiated this personalized combination therapy, and within one month, the level of alpha fetoprotein (AFP) declined by 64% (Fig. 2). Declining levels of AFP are indicative of a lack of tumor growth. 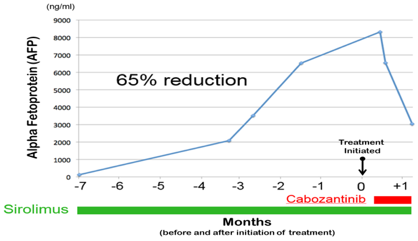 Fig. 2. Levels of alpha fetoprotein (AFP) were reduced by 65% after one month of treatment with a combined therapy of cabozantinib and sirolimus. This combined therapy was selected with the assistance of the CureMatch decision support.

As a result of the personalized combination therapy, the patient’s condition stabilized.