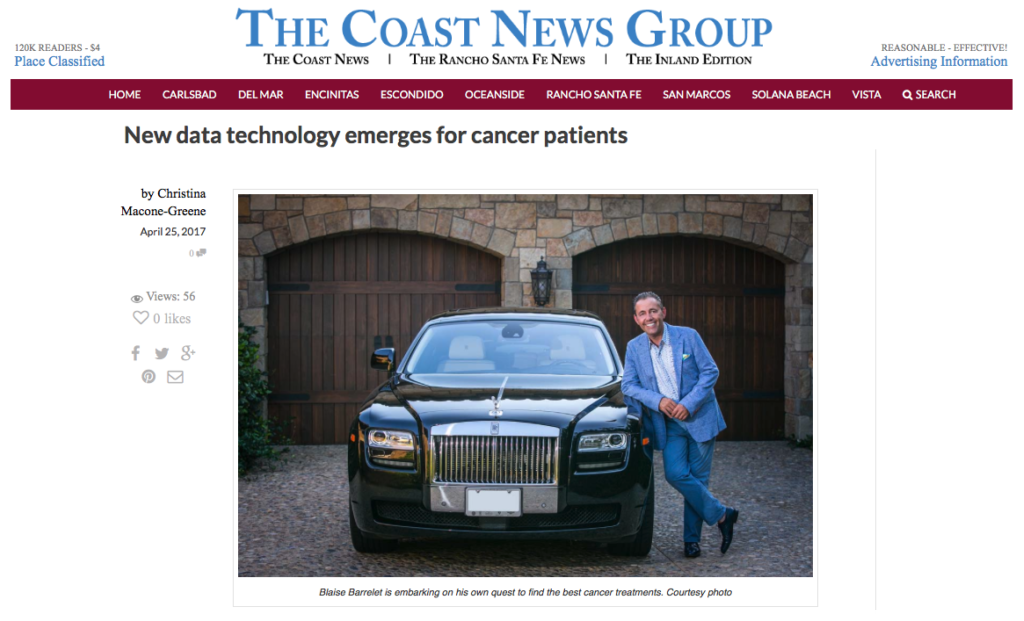 An article appeared in today’s Coast News which chronicles Blaise Barrelet‘s journey from cancer patient to CureMatch CEO, and shares that the CureMatch personalized medicine approach is online and ready. Actionable insights based upon genomics are now available to the best oncologists across the country to quickly match up combination drug treatments using the most in-depth custom curated databases of drugs and cancer mutations available.

RANCHO SANTA FE: While each person responds to their cancer diagnosis in their own way, one common sensation described by many is a fog-like emotional numbness.

Blaise Barrelet felt this very same sensation following his Chronic Lymphocytic Leukemia (CLL) diagnosis. When the fog lifted, he embarked on his own quest to find the best cancer treatments, which also inspired him to build a company to help other cancer patients.

A resident of Rancho Santa Fe for the last 18 years, Barrelet moved to San Diego 21 years ago. A native of France, Barrelet was instantly drawn to the Ranch’s topography, which he found reminiscent of the French countryside.

Considered a trailblazer in website analytics, Barrelet is regarded for his background in technology. After he founded WebSideStory in 1996, it underwent a successful IPO in 2004. Barrelet is a cancer survivor and described by many as a serial entrepreneur.

Nonetheless, it was his analytical mind that was the driving force in not settling for his oncologist’s recommendation of a chemotherapy protocol in addressing his cancer four years ago.

“So I started doing all my research. Luckily, I found out that one of the top three leaders in research for CLL was right here in San Diego at The Moores Cancer Center. His name is Tom Kipps and he’s really a fantastic guy,” he said.

Barrelet began to recognize the advances for a new protocol in cancer treatments: Personalized medicine by way of a tumor’s molecular profile.

It was this discovery that triggered the creation of CureMatch, Inc., which is headquartered in San Diego. Barrelet is a co-founder, holds the title of chief executive officer and is chairman of the board.

Barrelet explained that the software platform of CureMatch offers a decision support system in assisting oncologists by ranking the combination of cancer drugs based on the molecular profile of a patient’s tumor following a biopsy. He went on to say that once a tumor undergoes DNA sequencing, the next steps are a genetic analysis which ultimately arrives at the data-driven drug combination therapies. A patient’s oncologist can then review the information and arrive at a treatment plan that is individualized and tailored. This is important, Barrelet said, because no two cancers are alike.

According to CureMatch, matched combination therapy has been shown in studies to have higher response and survival rates than traditional chemotherapy or targeted monotherapies.

Barrelet uses the analogy of a sinking boat and how chemo is a “bucket” to empty the water in the vessel. Personalized medicine, however, looks at the gene aberrations which created the holes and analyzes the ways to plug as many of them as possible via combination match therapy.

Barrelet explained that CureMatch is combining drugs based on toxicity, on their interaction, and pathways at the molecular level.

The company also notes that its technology was originally created and licensed by a multidisciplinary team at UC San Diego Moores Cancer Center and the San Diego Supercomputer Center. It was then developed into a commercial product by CureMatch.

Currently, there are 300 FDA drugs for cancer treatment today. Barrelet said from that number, it’s estimated that there are more than four million possibilities for combination therapy. Additionally, there are roughly 500 more drugs in the FDA pipeline which will vastly increase these possibilities.

“What we’re trying to do is offer oncologists more knowledge,” he said. “There are only 2.5 percent of cancer patients today that get their tumors sequenced. It’s ridiculous, but it’s changing because the price of DNA sequencing is totally going down.”

Barrelet said that CureMatch is giving oncologists insight on what the best treatments are and helping patients by giving them hope.

Thanks again to The Coast News for stopping by and providing the opportunity to share this story of hope through the advances in personalized medicine. If you or a friend, family member, or medical professional are interested in fast tracking the oncology treatment process, contact us today.